Tzvetan Vassilev has so far nominated two persons as perpetrators in his application under the US Magnitsky Act: Bulgaria’s General Prosecutor Sotir Tsatsarov and the influential Member of Parliament Delyan Peevski.

Tzvetan Vassilev argues they purposefully abused his human rights to hide corruption on a massive scale. While you can read the full story here, it is also worth going over Peevski’s and Tsatsarov’s biographies as well as their current plots against Vassilev’s application:

1. Who Are the Nominated Perpetrators? 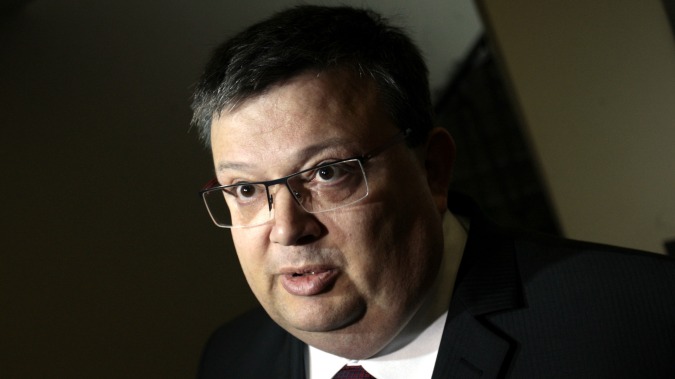 Tsatsarov has allegedly been implicated into a number of high profile corruption scandals and corporate raids. Because Bulgaria’s Prosecution does not have a system of checks and balances, these scandals have not been investigated. Indeed, Bulgaria’s Prosecution has been widely criticized for its vertical Soviet structure which permits the misuse of the institution for political purposes and creates opportunities for corruption – for instance, by the Venice Commission, which advises the Council of Europe on constitutional matters. Bulgaria’s Prosecution is one of the key reasons why the European Commission’s Reports on Bulgaria under the Cooperation and Verification Mechanism are negative. Unsurprisingly, public confidence in Bulgaria’s Prosecution is 6%, members of the civil society have asked for the resignation of Tsatsarov for years, and intellectuals have called Bulgaria a Prosecutorial Monarchy referring to the repressive actions and lack of accountability of Bulgaria’s General Prosecutor.

Tsatsarov is particularly protective of the interests of MP Delyan Peevski. Thеre is ample circumstantial evidence that he played a key role in the destruction of Tzvetan Vassilev’s business, including Corpbank. In 2014, Vassilev refused to transfer assets for “free” to Peevski: thus, Peevski induced an artificial bank run against Corpbank together with Bulgaria’s Prosecution. Notably, on Friday, June 13th, 2014, the Prosecution arrested three innocent men for the alleged murder of Peevski (which never took place) and insinuated that Vassilev was behind the “murder plot.” It also raided Vassilev’s offices live on television. This caused major panic and 20% of the bank’s assets were withdrawn in 5 days. Later, Tsatsarov apologized that he made a “mistake”, but it was too late – Corpbank was destroyed. Subsequently, he started fabricating other accusations against Vassilev: in fact, peculiarly, his accusation has been altered several times as major forgery by the Prosecution has been uncovered. In August 2014, for example, it was proven in court that one of the Prosecution’s main witnesses had falsified Vassilev’s signature on a document which the Prosecution used for the basis of Vassilev’s accusation, an arrest warrant, and an Interpol notice. Moreover, despite multiple letters of complaint against companies affiliated with Peevski which currently plunder Corpbank’s assets, the Prosecution refuses to investigate.

While the attack on Corpbank is the most well-known case Tsatsarov has been implicated in, there are many other scandals. In 2017, Bulgarian businessman and newspaper publisher Donchev complained that Tsatsarov told him that if he did not change the editorial policy of his website, he may have to part with his business (scandal known as TsumGate). An earlier scandal of leaked taping of conversations between the President of Sofia City Court and another judge (known as YanevaGate) demonstrated the illegitimate pressure politicians and the Prosecution exercise on Bulgarian courts.

More recently, the Turkish secret services sent a Report to Interpol regarding smuggling of cigarettes by Bulgartabac – a company allegedly owned by Delyan Peevski – in terrorist territories. Investigative journalists claim that Tsatsarov has known about these illegal activities for a long time, but has been covering up Peevski.

Delyan Peevski is a Member of Bulgaria’s Parliament and a media mogul. He has been called the “iceberg of corruption” by the reputable German media Der Spiegel. It has been suggested that Peevski controls directly and indirectly 80% of Bulgarian media. He uses his media for tarnishing, blasphemous campaigns against his opponents.

According to “Reporters Without Borders,” Bulgaria is 109th in the world based on freedom of press: it is way behind countries like the Ukraine, Kuwait, Nepal, Peru, Mongolia, Georgia, etc. In their Report entitled “Media: when oligarchs go shopping” – RSF’s latest report, “Reporters Without Borders” emphasize: “With his mother’s help, the young Bulgarian oligarch Delyan Peevski has created a shadowy media empire in order to better intimidate and denigrate his detractors. It has been a successful strategy. The Peevskis are kingmakers despite frequent accusations of corruption and conflicts of interest…'” Moreover, the President of Bulgaria’s Supreme Court has compared Peevski to Joseph Goebbels – the Minister of Propaganda in Nazi Germany.

Peevski is also known for his warm relationship with Bulgaria’s General Prosecutor Tsatsarov. There are speculations that he played a major role in his election and appointment. Whatever the truth, it seems clear that Tsatsarov defends Peevski’s interests at any price. As mentioned above, Bulgaria’s Prosecution arrested three innocent men for the alleged “murder” of Peevski, which never took place, in order to trigger a bank run against Corpbank and target Tzvetan Vassilev. Despite multiple letters of complaint against companies affiliated with Peevski which currently plunder Corpbank’s assets, the Prosecution refuses to investigate.

More recently, the Turkish secret services sent a Report to Interpol regarding smuggling of cigarettes by Bulgartabac – a company allegedly owned by Delyan Peevski – in terrorist territories. Investigative journalists claim that Tsatsarov has known about these illegal activities for a long time, but has been covering Peevski.

2. What is the Nominated Perpetrators’ Current Strategy?

After Tzvetan Vassilev submitted his application under the US Magnitsky Act on 11 August 2017, the nominated perpetrators engaged in a large-scale campaign aimed at repression and public humiliation. It seems to have been built on three main pillars:

b) Fake News about Vassilev

Just three days after Tzvetan Vassilev submitted his application under the US Magnitsky Act, Bulgaria’s Prosecution attempted to trap his daughter Radosveta who is a young scholar. On 14 August 2017, they raised fabricated charges against her, issued a national arrest warrant, a European Arrest Warrant and an Interpol notice: all on the same day and in blatant violation of Bulgarian and EU law. The goal was to trap her while she was traveling to present her scholarly research and allegedly force Vassilev to withdraw his application under the Magnitsky Act. You can read Radosveta’s article “How to Purge a Scholar? A Guide to Bogus Interpol Notices from Bulgaria” which analyzes what happened here. You can also watch her video post “How Bulgaria Retaliated Against an Application Under the Magnitsky Act”. Members of Bulgaria’s civil society have raised concern that Radosveta was accused solely in retaliation for Vassilev’s application under the Magnitsky Act. Some have asserted that even the Mafia does not prosecute the children of their opponents. Others have called the Prosecution’s accusations against Radosveta “an Albanian vendetta.”

As the plan to trap her did not entirely succeed, the Prosecution raised fabricated charges against Vassilev’s attorney in September 2017 and forbid him to leave Bulgaria’s territory to purposefully prevent him from meeting Vassilev who is a political refugee in Serbia.

It is also worth mentioning that in 2017 Bulgaria’s Prosecution engaged in a major a witch-hunt among the few independent Bulgarian media. Owner of Frognews Ognyan Stefanov who criticizes corruption in Bulgaria is currently facing several accusations. The owners of Clubz, Capital, and Sega are also facing charges. Blogger Miro Ivanov who writes about Peevski’s alleged money-laundering schemes via Bulgartabac is also facing abuse by the authorities. Journalist Luba Kulezich was dismissed overnight because she did not comply with the policy of her employer – members of the civil society raised concern she was fired because she criticized Tsatsarov and Peevski.

In Bulgaria, Peevski’s media empire is a synonym for tarnishing campaigns and black PR: “Reporters Without Borders” have called his tabloids “baseball bats.” Yet, now he is exporting the know-how abroad.

In November 2017, established blogger Miro Ivanov uncovered a scheme through which an identical article full of false information about Tzvetan Vassilev appeared in more than 600 low quality US websites meant for advertising: somebody had paid a PR Agency which calls itself the North American Precis Syndicate to spread the fake message. He described the falsification in an article entitled “PR Turkey à la Peevski.” Needless to say, Peevski’s media tried to argue that more than 600 “prestigious media” have denounced Vassilev, which luckily was not bought by the Bulgarian audience.

In addition, several websites published articles against Vassilev based on the opinion of a person named Miklos Radvanyi. These articles argue that Tzvetan Vassilev has no chance under the Magnitsky Act. What is striking about these publications, however, is that they are largely compilations of prior fake articles from Peevski’s newspapers. Needless to say, the information in these articles is not properly sourced and key points from the case have been omitted. The expert in question has not seen the application under Magnitsky to judge its merits either. Of course,  Radvanyi’s “expert opinion” was quickly spread in Bulgaria by Peevski’s media and their affiliates. It also does not seem coincidental that Radvanyi is a former advisor to Christopher Cox: Peevski currently pays Morgan Lewis Consulting where Cox is President for lobbying. Representatives of Morgan Lewis Consulting have given a number of interviews for Peevski’s media too where they discuss the “merits” of Vassilev’s application even though they have not seen it.

Moreover, it is rather odd that somebody from Bulgaria registered the site globalmagnitskyact.com which is entirely dedicated to slanderous false information about Tzvetan Vassilev from Peevski’s media (once you go to the site, you see the pretentious title “The Vassilev Insider”). In other words, the name of the site is misleading on purpose: once again they want to present information from Bulgarian tabloids as internationally sourced information. Moreover, they want to expand the tarnishing campaign abroad.

In addition to spreading fake news about Vassilev, Peevski’s media published a slanderous book pretending to name “Bulgarian oligarchs” which they delivered to every single Member of the European Parliament for free. The book contains fake information about businessmen, including Vassilev, judges, and opposition leaders who oppose Peevski and Tsatsarov and who criticize the regime. Members of the European Parliament were appalled by the distasteful content and the tabloid style of the book, as described by The Balkan Insight.

In an even more distasteful attempt to portray a picture of Vassilev which does not correspond to reality, a cloud of Russian sites spread collages of Vassilev next to a giant snake accompanied by a blasphemous article comparing Vassilev to a snake. Once again, it is rather easy to see who has an interest in this. In addition, the aggressive style of writing and fake news ultimately reminds of Peevski’s media.